Beyond Fitness Director Boris Lukin gives a unique insight into life with the RAAF in Afganistan for six months. He speaks here about a typical day there, exercise routine, diet, and how he became the “go-to-guy”, for anyone with injuries, aches or pains (Boris is also an Osteopath and Personal Trainer). 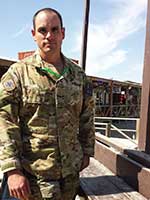 I’m looking forward to coming home from Afghanistan in March. My time deployed to Afghanistan has been a great experience and a challenge.

The role that I was part of with the Royal Australian Air Force was Flight Line Security working 12 hour shifts doing security tasking and working closely with American, Belgian, Dane and British air forces.

What was it like to work with the other countries?

Working closely with these forces has been a great cultural experience and occasionally frustrating with their different approaches to tasks.

Even with our differences we had some interesting conversations and fun working those long hours.

Tell us about your first week in Afghanistan

My first week in Afghanistan was hot and uncomfortable. Yeah sure we had four days in Dubai where it was 10 degrees hotter but it wasn’t enough time to acclimatise – hence a very hot few weeks with a lot of chaffing.

Besides all the sweating, as soon as you stepped out it was a little daunting being in a new dusty, hot environment that was very bland with each building surrounded by concrete T-walls.

The first week made our heads spin with all the briefs, forms and orientations that we had to do. Everything was new and we tried to get as much information about the job and our role within the security team.

Not to mention the sheer size of the place – with 30,000 personnel on this base it was quite big with navigation initially a little tough. I found all the buildings, roads, drains and power lines very interesting.

Considering that the whole place was built up over time, there was a mix of fixed buildings and portable container buildings.

The fixed buildings were properly engineered while the portable buildings were just scattered around the place with some consideration on their placement.

In short the 12 hour days the first week went very quickly as it was just a huge learning curve and we didn’t get much of a chance to learn things slowly.

We had to hit the ground running.

Outline a typical week of your life there

We worked 12 hour shifts from 10am to 10pm. With four days work and one day off per cycle.

Photo: The ‘mainline’ for lunch and dinner.

We were on rotation for lunch and dinner so would have to wait until relieved to go to the DEFAC (Dining Facility) to get a take-away container full of whatever food we felt like.

On post we would do our duty as required, but the best thing was just working with people from other countries where we got to chat about all kinds of stuff.

Most of the conversations were centred around the difference between our countries until we got to know each other a little better.

Days became a little monotonous, especially the work, but we got through it just because we made it fun.

Yes NATO did provide a great training facility, probably some of the best that I have seen! There were a number of gyms around the place and depending on what style of training you did, each one was suited for something different.

We had the ‘big boys gym’ where all the huge guys would go and throw weights around, mostly Americans. I only trained in there once.

The NATO gym was where I spent most of my time. It was the best organised gym and very clean.

The one thing that Afghanistan has plenty of is dust. Lots of it. It gets into everything.

This was a stark contrast to the outside. This gym was the only one where the staff would go around and clean the equipment about every 2 hours. The equipment was also top notch, the kind of stuff you would find in any Fitness First.

There was also a cross fit gym which was outdoors. I can’t tell you much about this one as I never trained there in my whole 6 months. The one thing that they did very well over there is organise sporting events.

At the board walk (an area in the middle of base with all shops, named because of its elevated position made of boards like a board walk) there was a properly constructed soccer field. It had fake grass, a running track, a beach volley ball court, basketball court and a concrete ice hockey rink.

Every day and night you could see games on each court, some organised complete with trophies, and others just social games.

Outdoor sports were an ongoing pastime.

Watching sport with a coffee or protein shake in hand was a great way to spend some time.

There were also plenty of other smaller gyms and basketball courts dotted around the place. And plenty of people jogging around the roads.

Gyms and physical activity are definitely a very important part of deployed military life. It keeps you sane and fit.

What sort of training regime did you have there?

From the beginning my aim was to get a little leaner and build some muscle. 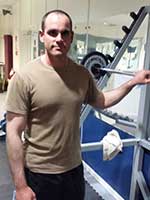 Boris in the NATO gym.

I did a four day routine:

I wouldn’t do more than eight reps of any exercise but I would regularly change the type of exercises that I did depending on how I felt during the day.

Most of the time would hit the weights in the morning and it would just depend how I felt from the night before and if I had enough sleep.

In the evenings I would do some form of cardio work for a minimum of 20 minutes before bed and that I would do three days out of the four.

Tell us about the food over there, and if you had to go on any special food diets or programs. 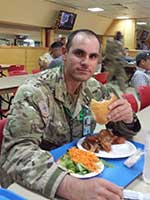 There were many food options for each meal.

It was mainly based on an American diet hence a lot of fried and fatty foods, burgers, hot dogs, corn dogs, fried chicken, chicken tends, pizza etc… there were also plenty of healthy options in the way of salads, steamed vegetables and grilled chicken.

Each meal had a ‘mainline’ where we were served food like steak, roast turkey, meat loaf, enchiladas, and veal.

There were occasions where some foods were not available, but there was always something healthy to eat.

The biggest thing that I noticed about food here is that Americans like to eat different shades of “fried” – French fries, fried chicken tenders, roast potato, and covered in 100 island dressing.

It was a surprise seeing all the colours on their plates.

It’s so much easier eating healthy when it’s all prepared for you and sitting in front of you to make a choice.

For lunch and dinner, I would consistently eat some meat from the mainline. Chicken breast was my favourite, with all the steamed vegetable and plenty of salad.

I got addicted to green olives and had to have them with every meal including breakfast – they go great with hard boiled eggs!

Did you use your skills as an Osteopath and Personal Trainer there?

It wasn’t long before it was well known among our crew that I was ‘the Australian Osteopath’. I ended up being the go-to-guy with any injuries, aches or pains. I enjoyed the challenge of treating the different injuries with the limited resources, including a proper treatment table.

I did manage to successfully diagnose and treat a number of different conditions using makeshift equipment. I would have to say this was my favourite part of being here.

What conditions did you successfully treat?

Most of the conditions were sporting injuries. As you can imagine, young fit guys would overdo things going crazy in the gym and at sporting events.

So most of the injuries were due to gym overtraining and sporting sprains.

The conditions that come to mind straight away are:

These conditions were treated successfully using a combination of manipulation, dry needling, and soft tissue work. On top of actually doing some hands on treating I consulted a lot for people with niggling injuries including:

After all the people I treated, I’ve realised that the biggest contributor to injuries (especially in the shoulder, was a lack of knowledge and education.

These guys would go to the gym following programs that they read in a magazine or internet without any other considerations or professional consult.

Of course, boys will be boys who know everything there is to know about training. Resulting in injury.

Most of these conditions could have been avoided if they consulted a professional to discuss what’s best for them.

What equipment did you have with you?

I did plan ahead and brought along with me about 200 acupuncture needles and everything that goes with it. I had an endless supply of sunscreen and other moisturisers that I used as massage oil. It was the perfect consistency for myofacial work.

What did you do in your free time?

During our down times there was plenty of opportunity for socialising and self-improvement to help pass the time and keep sane.

The state-of-the-art gym facilities were a great way to spend some time burning up extra energy and getting huge. Not to mention the once a week social soccer game with the Belgians. It was Australia versus Belgian. They beat us every time!

What was the most difficult part of being away?

The challenges was being such a long way away from home and locked in a bubble (the airfield).

I’m looking forward to returning home and seeing everyone again.

Photos: All photos were taken by Boris Lukin or by request from Boris Lukin.

Thanks to my good trainer Ben, Boris, and the team at Beyond Fitness for helping me reach my goals…and Glenn’s magic hands…with any injuries.

I cannot highly recommend Boris and his team at Beyond Fitness enough. They have helped me achieve my fitness goals with their expertise and support.

I asked Ben to assist me in learning weight lifting techniques. It was hard work but fun…and challenges my strength. Ben is really knowledgeable, very supportive with client challenges and personal goals. And he is not sweet, nice Ben – he is mean …works me hard!!! But getting lots of great results.

I’ve been going to Boris at Beyond Fitness now for several months. As a rugby player for more years than I care to count, and even more injuries, I’ve definitely been to my share (and your share as well, probably) of physios, osteos, sports massages... so when I say Boris/Beyond Fitness would be up there with the best that I’ve been to, trust me, I’ve been to a few!